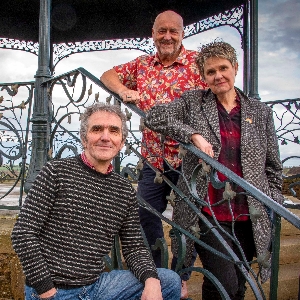 This event is for 16 and over - No refunds will be issued for under 16s.

Bob Fox, Jez Lowe & Julie Matthews
'In The Footsteps Of Ewan MacColl'
Monday 22nd May, Doors 7.30pm
Tickets are £18 (+ b/f) in advance (more on the door) and available from See Tickets.

*This is a seated show with all seating unreserved*

Bob Fox, Jez Lowe & Julie Matthews come together 'In The Footsteps Of Ewan MacColl', a concert of songs and spoken word.

In the 50s and 60s Ewan MacColl along with Charles Parker and Peggy Seeger created the groundbreaking Radio Ballads broadcasts for the BBC Home Service covering a variety of subjects and using an audio documentary format to highlight the experiences of real people weaving the voices of rarely-heard communities with songs written from and about their recorded interviews. Almost half a century later, in 2006, a new set of Radio Ballads were commissioned by BBC Radio 2 using the same format but this time involving a whole team of stellar musicians, singers and songwriters from the folk/acoustic/roots music scene under the guiding hands and watchful eyes of producer John Leonard and musical director John Tams.

Now three members of that team, Bob Fox, Jez Lowe and Julie Matthews, have put together a selection of songs from the 2006 new Radio Ballads for a concert performance 'In The Footsteps Of Ewan MacColl'.

All three are consummate engaging performers of meaningful songs and stories and are multi-instrumentalists whose skills have been honed by decades of live touring throughout UK, Europe, Canada, U.S.A, Australia and New Zealand. They have all recorded extensively, worked in collaboration with many of the top folk roots artists and bands as well as having highly successful solo careers and are well loved and respected by audiences and colleagues alike.

Expect to be entertained and enlightened by songs of joy, love, hardship and humour.