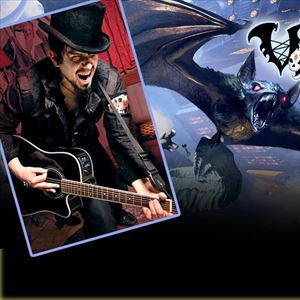 This event is for 16 and over - No refunds will be issued for under 16s.

AURELIO VOLTAIRE entertains on so many levels but always with a big heart, his dark and twisted cabaret is always a fun filled experience as he regales us with his life experiences along the way.

Aurelio Voltaire is often described as a modern day renaissance man. He is a singer/ performer, creator of comic books, animation and toys.

As a musician, he is a songwriter whose music can best be described as a collection of murder ballads, tongue-in-cheek exercises in the macabre, with just enough bawdy songs about Star Trek and Star Wars to keep a convention audience rolling in the aisles. Many know him for his songs "Brains!" and "Land of the Dead" from the Cartoon Network show "The Grim Adventures of Billy And Mandy".

Aurelio Voltaire's live shows, whether solo or with his skeletal orchestra, are full of stories and games. Many describe his shows as sitting around a fire while an old friend regales you with tales, presuming that old friend drinks a liter of rum a night, dates zombie prostitutes and wrestles Krakens.

Voltaire has been recording and touring for 20 years. He's released 11 full length albums. The first five were released by Projekt Records. These days, Voltaire self-releases most of his CDs.